The Game Theorists Wiki
Register
Don't have an account?
Sign In
Advertisement
in: Articles needing cleanup, People, Theorists,
and 3 more

Ronald Oni "Ronnie" Edwards was a content creator for The Game Theorists and The Film Theorists known mostly for editing the videos uploaded.

Besides editing for Game Theory and Film Theory, he hosted his own animated show known as Digressing and Sidequesting, where he explained the concept and design of many popular video games. Ronnie also had his own YouTube channel, DigressingNSQ. In 2015, his channel had over 20,000 subscribers and over 500,000 video views.

During E3 2018 Edwards was in the middle of an internet backlash when some fans posted to Reddit stating that Edwards came off as rude and "disrespectful" to those there to meet him. Patrick stated the incident did not lead to Edwards' decision, it had been a rough few months and created worry for those closest to him.

On July 4, 2018, Edwards was found dead in his home. The cause of his death was ruled as a suicide. 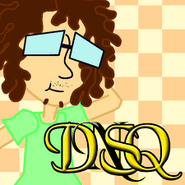