Stephanie Claire "Steph" Patrick (née Cordato) is the director and strategy consultant of Theorist Media, wife of Matthew Patrick, mother of Oliver Patrick as well as the co-founder and co-owner of the three main Theorist channels, the other being her husband. Aside from her behind-the-scenes work, Stephanie is equally active on GTLive.

Stephanie Cordato was born on August 9, 1987, in North Carolina and moved to Angier, NC (near Raleigh) when she was six years old. She went to college at Duke University in Durham, NC, where she received a bachelor's degree of Science in Chemistry in 2009, as well as a major in classical languages, specifically Latin and Greek, and she possibly had another major in English. At Duke University, she met Matthew Patrick in a computer science class, and together they created a The Legend of Zelda parody game called The Epic of Stew.[1]

After graduating, Stephanie went to Weill Cornell Medical College in New York. She graduated in 2011 with a Master of Science Degree in Pharmacology, of which she achieved perfect grades and a first year research award. She eventually worked as a consultant and engagement manager for Campbell Alliance, where she learned strategy consulting.[1][2]

Matthew proposed to Stephanie on November 17, 2010, on their 1500th day anniversary. To celebrate this, MatPat created a video about their relationship, which was a series of clips from their years together, and that video was the first one MatPat put a lot of time and effort putting together and editing [3]. They married on May 19, 2012, in North Carolina.

On March 12, 2018 a video was uploaded on The Game Theorists channel stating that Stephanie was pregnant, and was having the baby in upcoming summer. They later revealed on their instagram that their child is a boy, and is due on July 4, 2018. He was born on July 9th 2018 with the name Oliver Julian Patrick.

They currently reside in Westlake Village, Los Angeles, California with their cat Skip.

So far, Stephanie has appeared in just about every GTLive livestream and has had brief cameos and mentions in many videos on The Game and Film Theorists. 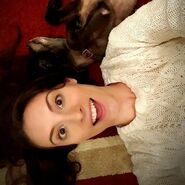 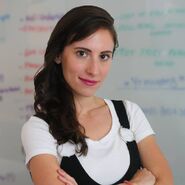 Add a photo to this gallery
Pictures of Steph
Retrieved from "https://matpat.fandom.com/wiki/Stephanie_Patrick?oldid=21049"
Community content is available under CC-BY-SA unless otherwise noted.